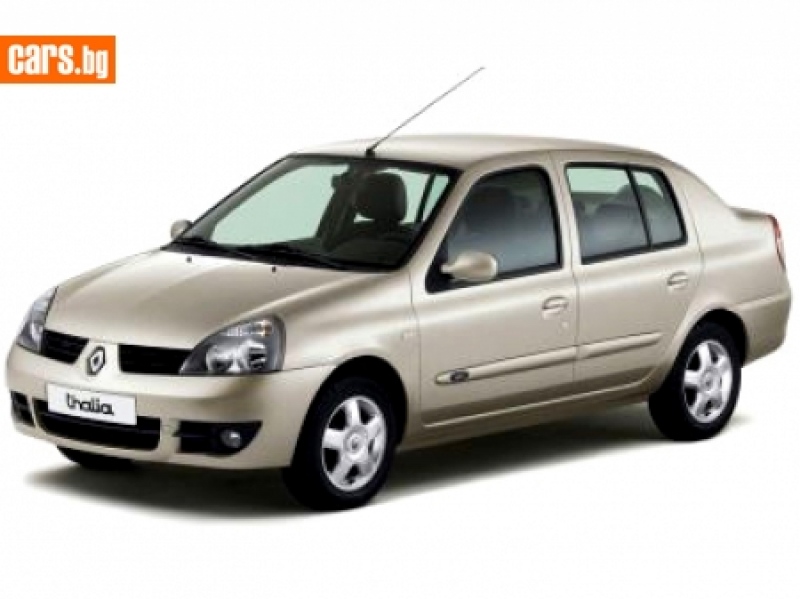 16 July 2013
n late 1999, the Clio Symbol began production in Turkey, as the saloon version of the Clio II.[5] It was subsequently launched in other countries, under different names, depending of the market: Clio Symbol,[6] Thalia,[7] Clio Sedan,[8] Clio 4 Puertas,[9] Symbol,[10] or Clio Classic.[11] The car was intended for sale in developing countries, where saloons were traditionally preferred over hatchbacks, most notably in Eastern Europe. In some Latin American markets, like Chile and Mexico,[12] the facelifted model was offered as Nissan Platina, with slight changes at the front of the car to make it resemble the Nissan Altima. It is longer by 38 cm (15.0 in) than the hatchback and has a larger boot of 510 litres (18 cu ft).[13]

The main production site of the model has been the Oyak-Renault plant in Bursa, Turkey, where manufacturing started in 1999.[5] Worldwide, it was also built since 2000 in Argentina at the plant in Santa Isabel, Córdoba,[14] in Brazil at the Ayrton Senna complex in Sao José dos Pinhais, near Curitiba,[15] and since 2001 in Colombia by Sofasa.[4][16] In 2002, it began assembly in Mexico, rebadged as Nissan Platina, at the Nissan Mexicana plant in Aguascalientes.[17] For a short time, between the end of 2002 and 2004, it was also assembled in Russia by Avtoframos.[18][19] The Platina was dropped following the 2010 model year,[20] and was replaced by the March in its Mexican assembly plant and the line-up. 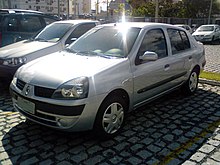 It was facelifted in March 2002,[25] gaining the new front end of the hatchback Clio, black moldings on the bumpers, slightly revised interior (electric window buttons moved from the central console onto the doors, the steering wheel got a new design) and improved safety levels. New engines were also added: a 1.2 liter engine (75 hp; 54 kW), a 1.5 liter dCi (75 hp; 56 kW) and the 1.6 liter 16-valve petrol (107 hp; 80 kW) in Europe, which was only available with the Dynamique trim level. Throughout the following years, two other versions of the 1.5 dCi engine were included in the range: one of 70 hp (51.5 kW) and one of 80 hp (58.9 kW).[26] An automatic transmission version was added, but only with the 1.4 16-valve engine.[27] 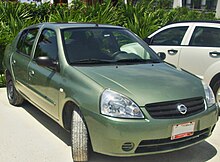 The Nissan Platina was available only with the 1.6 liter 16-valve petrol engine (110 hp; 82 kW). It had four trim levels, baptized Grado Q, Grado K, Grado K plus and Grado A, the same as the top cards in a playing deck.[30] From the 2008 model year, they changed to Custom, Emotion, Premium and Premium A.[31] It was sold either with a manual gearbox or with an automatic one with overdrive system.

In the first half of 2005, minor changes were done to the Renault models. These included clear tail lights and side repeaters, a slightly modified grille and some of the display units passing form analogue to digital.

In the beginning of 2006, an improved version of the sedan was offered in Argentina and Brazil, and from fall in Europe.[32] At the exterior, it now had body colored bumpers, without moldings and regardless of the trim level. The shape of the grille was revised and the boot got a new handle with the Renault logo integrated, similar to the one used on Laguna, as well as the new styling of the Renault word. Four new colors were made available and two distinctive new rim designs. For the European model and the Platina,[33] the interior was upgraded to the one used in the facelifted Clio II, with very minor parts commonality with Mégane II, as well as new standard and optional equipment, such as automatic air conditioning and a CD player.[34]

It scored 12 points out of 16 in a frontal crash test conducted by the Russian magazine Autoreview in 2002, which was considered equivalent to the result scored by the hatchback version in the Euro NCAP testing.[35] Over 600,000 units were sold worldwide since the
release of this mo

Company Alfa Group 11 ltd Rent a Car was established in 1996 in Sofia. From then until today, the activities of Alfa Group Rent a Car is developing, expanding and started a new business, we are the only company in Europe that imported directly from Korea, Kia and Hyundai gas liquid phase which rent and sell as a guarantee 1 year full warranty and replacement car service and spare parts. After its establishment Alfa GROUP LTD 11 Rent a Car has already established itself on the market as one of the best companies for the Department of car rental. We can boast a wide variety of customers. The reason for this is that we offer you just what you need. We bidding flexible and individual approach to each client.

What can find us:

* Cars from Mini, Economy, Compact, Standard, Family, 4 * 4 classes, minivans and luxury car rental.
* We are the only company that rents luxury cars GAZ
* The company operates a variety of brand new cars
* We provide transfers to anywhere in the country and Europe
* You can get away from us anywhere and at any time- on the airport to home to office
* We do discounts for corporate and regular customers
* We offer professional drivers
* Extras as: GPS, child seats, road maps, ski rack, chains
Cars are our property and can not travel abroad

We provide much more than rich fleet, with us you will receive the highest quality of service, for your satisfaction and peace of mind is the most important goal. It will be taken care of a team of young and ambitious people who will give everything for your comfort.
When traveling abroad we will prepare all necessary documents and insurance to ensure you travel safely without problems with border officials and the police abroad.
Among the leading steps of our policy work are:

1. Constant professionalism
2. Regular assessment and meet the needs and requirements of customers
3. Continuous communication with our customers

"There is only one simple but extremely powerful pravilo- Always give your customers more than they expect," and keep in an individual approach according to the needs of the customer.

What is important to us:

* We respect the commitments to our customers, employees and competitors
* We do business with unwavering high standards of honesty, trust and professionalism
* We will communicate open and friendly with you, sharing everything you are interested.
In our rental car that you see on our site are actual photos as you see what brand and model that you hire.
Rental cars at us with clear conditions and with no hidden fees and limited mileage.

Respect for the individual

* For every client we treat with respect, dignity and professionalism
* Ineteresat the customer is always first
* We are fully committed to provide personalized service and satisfaction to all our customers
* We will give everything to keep you as our regular customer and you always receive more than what you need.
+359876831441, Sofia -1373, West Park ul.Sava Mihaylov bl.33A office five await you.